Meteora is a very distinctive rock formation found in central Greece. In this guide, I explain how to plan your trip there and what to see.

A quick guide to Meteora

Best time to visit: during Spring or Fall

How long: a couple of days is enough to visit the area and relax for a while

Why it is worth visiting: it’s a unique place. There’s no other places like it in the world

Quick tip: each monastery has a different closing day. If you are interested in a particular one, check its opening days.

Where to stay: if you choose to stay one night in Meteora I recommend this hotel

Nothing is more strange and wonderful than this fantastic region, unlike anything I have ever seen. In . . . all the mountainous regions I have been to, there is nothing that compares to these extraordinary pillars.

Curzon’s words summarize quite well the feelings you’ll get when observing these incredible rock formations for the first time in Thessaly, Greece.

Welcoming the tourists, there is an imposing stone “forest” composed of more than twenty huge rocky pillars towering into the sky, hundreds of meters high. But the most incredible thing is the monasteries built on top of these rocks.

This is Meteora, a unique and extraordinary combination of rock formations and human labor. The name “Meteora” – from a Greek word meaning “things that stand on high” – refers to this group of isolated rocky pillars and the more than 30 monasteries built on them. The average height of these rocks is 300 meters, but some exceed 550 meters.

Geology of Meteora: how were these rocks formed?

The region of Meteora was once covered by a shallow sea. Over time, the sea receded and the area was exposed to the elements. The sandstone that makes up the pillars was formed from sediments that were deposited on the sea floor.

As the years passed, the forces of wind and water worked to erode the sandstone, slowly shaping it into the towering pillars that we see today. The pillars have been further sculpted by the elements over time, creating the unique and striking landscape that we see in Meteora.

The monasteries of Meteora were built by monks from the 11th century onwards. These monks were seeking solitude and a place to practice their religious beliefs, and they saw the towering pillars of Meteora as the perfect location.

Building the monasteries was no easy task. The pillars are very tall and steep, and there was no easy way to reach the top. The monks had to use a series of ladders and ropes to access the top of the pillars, and then they had to carve out steps and pathways to make it possible to move around and access the monasteries.

Once they had reached the top of the pillars, the monks began building the monasteries. They used a combination of natural materials, such as stone and wood, and they carefully crafted each monastery by hand. The result was a series of beautiful and unique structures that are now a major attraction in the region.

Despite the challenges, the monks persevered and were able to build several monasteries in Meteora. Today, only six of these monasteries (two of which house nuns) are still in use, but they continue to be a major draw for visitors to the area. The monasteries are a testament to the determination and skill of the monks who built them, and they remain an important part of the history and culture of Meteora.

The first hermits to climb Meteora were a certain Barnabas, between 950 and 965 E.V., and Andronicus of Crete, in 1020. Other monks from all parts of the Byzantine world joined him so the number of rock-top monasteries reached 33. In the 16th and 17th centuries the communities reached the height of their importance, but from then on their decline began.

Today, according to the United Nations Educational, Scientific, and Cultural Organization, the Meteora monasteries represent an invaluable cultural heritage. In recent times, the Greek government has been taking care to preserve Meteora’s cultural heritage, and partly due to the fact that they have appeared in several films, Meteora is increasingly visited by tourists.

How to get to Meteora 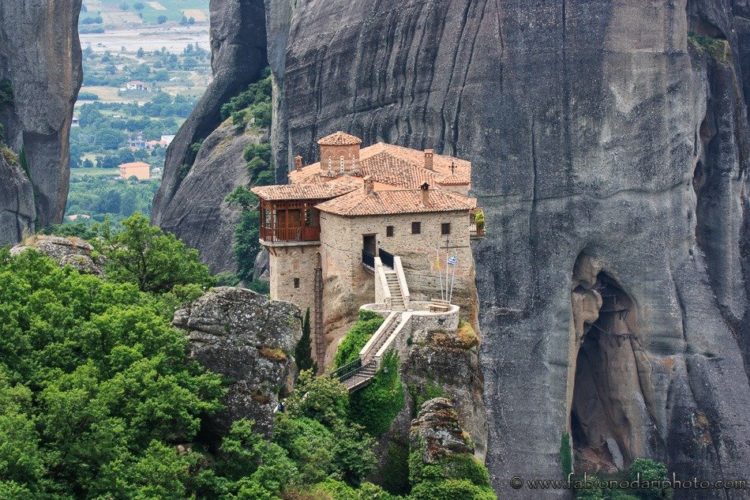 There are several ways to get to Meteora but none of them are very fast. Here are a few options to consider:

If you want to visit Meteora, I recommend staying in Kastraki, a pretty village at the foot of Meteora. You can find some good deals on Booking.com. If you prefer Trip.com here you will find some discounts.

How to get around Meteora and opening times of the monasteries

Once you arrive in Meteora, there are several options for getting around the region and exploring the monasteries and other attractions. Here are a few suggestions:

One important thing to keep in mind if you want to visit the monasteries are the opening hours; some are open only in the morning. These are the closing days instead:

When I was there, admission to each monastery was about 2€.

In conclusion, visiting Meteora in Greece is an unforgettable experience. The monasteries offer a glimpse into the history and culture of the area, and they are a must-see for anyone visiting Greece. Whether you’re interested in history, and culture, or simply enjoying the natural beauty of the area, there is plenty to see and do in Meteora for everyone.

You can find more photos taken in Meteora here and here you can read an article about Lake Kerkini also in Greece. If you want to visit North Macedonia, don’t miss this travel guide.